As the Australian housing market enters a downturn phase, the number of sales and listings that take place nationally are tipped to fall from recent highs.

In May of 2022, there were 39,790 sales estimated to have settled across Australia. While that is high for this time of year, it is 26.9% lower than in April of 2021. In fact, monthly sales volumes across Australia have generally been trending lower since November last year.

First fall in home prices since the pandemic

After a massive 28.6% gain from their pandemic low – which was the biggest gain over 21 months since 2003 – national average home prices fell for the first time in May since September 2020 based on CoreLogic data. While national average dwelling prices fell 0.1%, they were led by falls of 1% in Sydney and 0.7% in Melbourne. Sydney prices have now fallen for four months in a row and Melbourne prices for three months. Momentum in monthly home price growth has been steadily slowing since it peaked at 2.8% in March last year.

Historically, sales volumes and housing market growth have trended together. Figure 1 shows seasonally adjusted, monthly sales volumes across Australia against the monthly change in dwelling values. The two series are correlated, suggesting that more properties tend to be purchased when property values are rising.

With the two metrics broadly moving in line with one another, it is hard to determine which of the two factors is a leading indicator of market conditions. On the one hand, a decline in sales numbers reflects a decline in demand, where the absence of buyers forces vendors to lower their prices. On the other hand, falling prices can reinforce lower sales numbers, because property price falls may deter buyers who consider purchasing in a falling market more risky.

An important factor at play alongside this relationship is interest rates. Figure 1.2 shows the same data as Figure 1, but with the monthly RBA cash rate setting overlayed. Interest rates also influence the number of buyers in the market, because higher interest limits borrowing capacity. For this same reason, rising interest rates tend to put downward pressure on property prices. CoreLogic has previously written about the inverse relationship between the cash rate and the CoreLogic Home Value Index. Transaction activity is another facet of the housing market that slows amid higher interest rates.

Other transaction activity indicators have also pointed to weaker buyer and seller activity when property prices decline. Figure 2 shows the national rate of Australian housing stock selling on a rolling, 12-month basis. Otherwise known as the ‘turnover’ rate, this indicator bottomed out in mid-2019 at 4.0%, which also marked the trough of the previous dwelling price cycle. Additionally, the national turnover rate hit a decade high of 6.2% through the recent peak growth period of Australian dwellings in 2021. At the end of the March quarter, turnover had eased to 6.0%. 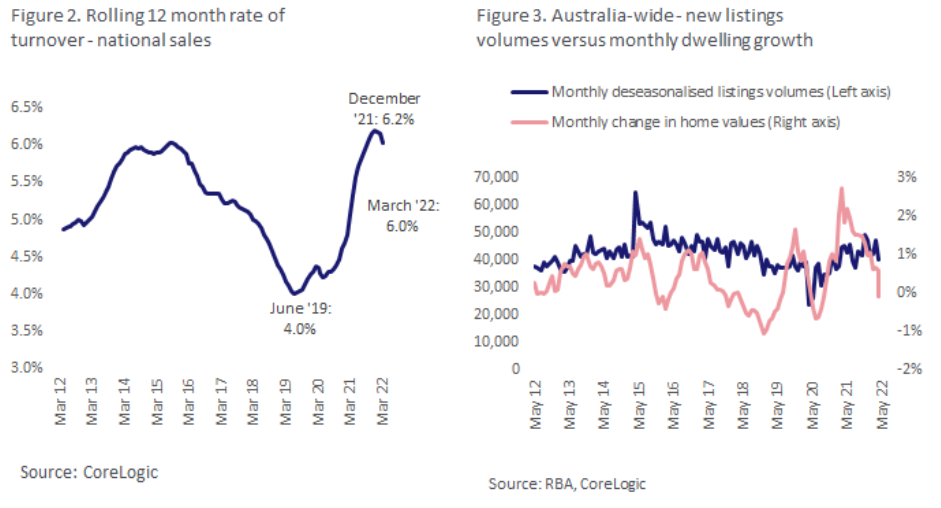 Vendors less likely to sell in a declining market

In recent weeks, new listings have been rising, and auction numbers spiked at the end of May, following volatility amid the federal election. But listings volumes may also eventually ease, as vendors become reluctant to sell in a falling market. Figure 3 shows new monthly listings volumes (deseasonalised), alongside monthly movements in the national home value index.  The relationship between listings volumes and the change in housing values is less strongly correlated than with sales and price movements but advertised stock will generally trend lower during housing market downturns.

In a way, lower advertised listings during price falls points to an element of stability in the housing market over time. As long as potential home sellers are able to meet their mortgage repayments, there should be relatively low instances of forced sales. Instead, more sellers may choose to hold their property during a downswing and try to list when they can capitalise on higher prices.